An Adoration of Performance 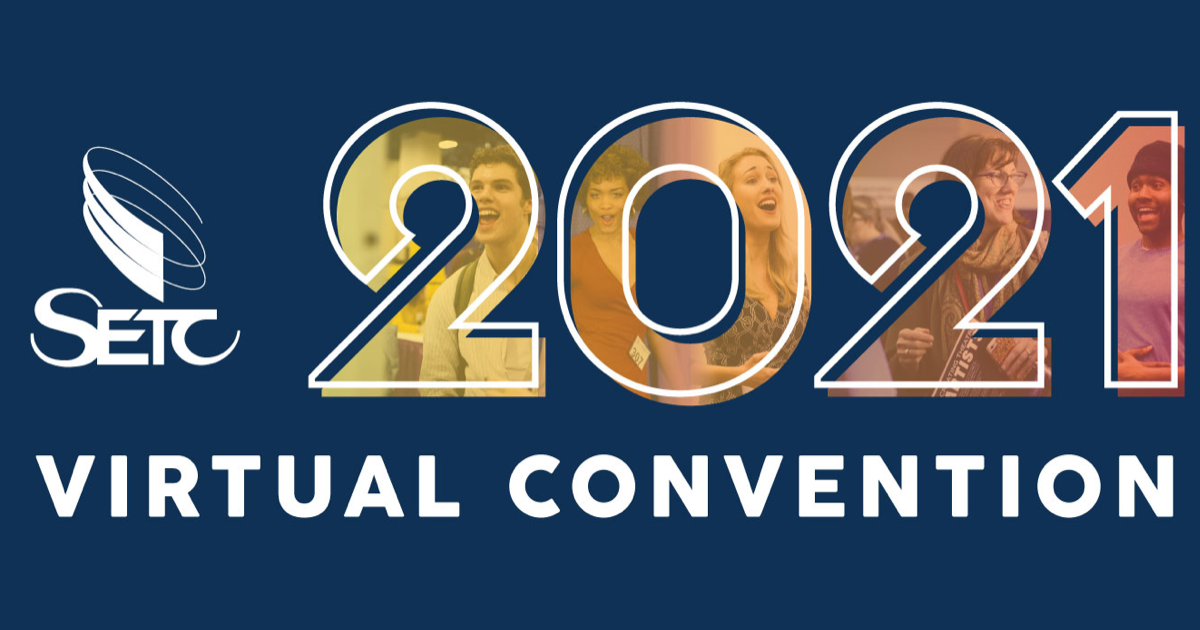 While the past year has interrupted or altered many plans for the theatre community, some things still find a way forward. Every spring semester finds NC State University Theatre students preparing for the annual Southeastern Theatre Conference, and this year is no exception.

The Southeastern Theatre Conference (also known as SETC) is a nonprofit organization, comprised of individuals, theatres, educational institutions and arts organizations who gather for an annual spring convention. Attendees gather from ten states in the Southeast and beyond, ranging from K-12 teachers, high school students, and university students to industry professionals, educators, and companies. NC State University Theatre has a long history of its students participating. Some go for the professional auditions and graduate program interviews, others for the design competitions, workshops, or the job fair. No matter the area of interest in theatre, there is always something for everyone.

For actors, their Spring Professional Auditions offer a unique opportunity to be seen and potentially hired by many professional companies across the region at one time in one of the nation’s largest unified auditions. Large though it is, SETC’s Spring Professional Auditions remain a selective event: auditionees must first pass state screening auditions before being allowed to participate. For University Theatre students, SETC screening auditions are handled by the North Carolina Theatre Conference in the autumn.

This year, both the auditions and the conference itself are being held 100% virtually in light of the COVID-19 pandemic, but many University Theatre students were undeterred and will be attending despite the change in format. In the fall, actors recorded a monologue and/or song selection and submitted it to an NCTC panel of judges to be evaluated and hopefully advanced to the SETC Spring Professional Auditions.

The virtual screenings yielded success this year: every student actor passed their screening audition and will continue to the SETC Professional Auditions.

For junior Dani Coan, these virtual auditions will be her first for SETC. The Winston-Salem native has been seen on the University Theatre stage in Our Town as Emily, A Good Little Rain as Michelle, The Colored Museum, Ragtime, and more. Offstage, Coan is a social work major and the founding Vice President of NC State’s Black Artist Coalition. Currently working as a research assistant at Chapel Hill with hopes to attend grad school there too, she balances her ambitions for social work and acting, but is not letting herself stress about SETC auditions.

“It’s not an all-or-nothing game for me, especially since I’m not a senior,” Coan says. “I don’t have to put too much pressure on myself and I can just have fun with it, which is the best way to go into theatre: having fun with it. If you’re having fun onstage, the audience will have fun with you.”

Fifth year senior Riki Dows is a veteran of the University Theatre stage, having performed in ten shows including Hairspray as Motormouth Maybelle, In the Blood, and Nunsense, as well as several other shows with local theatres. In 2019-2020, she even won NC State’s prestigious Bitzer Award for Performance. Nearing graduation, Dows is majoring in both Communication Media and Arts Studies (Music), but she has her eyes on attending NYU Steinhardt for grad school because of their dual degree program in vocal performance and pedagogy, hoping to teach as well as perform. Originally from Wadesboro, NC, Dows credits her experiences with University Theatre for “changing the whole trajectory of what I want to do with my life.”

At NC State, she learned “the joy of the work,” as she describes. “There wasn’t any technique taught at my high school so I had no idea… But there’s work to be done with acting, there’s a technique, there’s a method, a process… I had to learn there’s a character behind the voice. You’re not just singing at people, you’re telling a story, and there’s technique behind that.”

Ariel Penland is a senior majoring in Communication Media with a minor in Film Studies. An aspiring actress since childhood, she has appeared on University Theatre’s stage in Fefu and Her Friends in the titular role, Pride & Prejudice, and more. She most recently appeared in February’s virtual reading of Heritage. Penland entered University Theatre soon after arriving at NC State. “Even just walking into the theatre in my first week of my freshman year to auditions, I was never treated like an outsider,” Penland recalls. “I was just immediately welcomed in… There’s just so much love from the people in the community.”

Though she has acted since middle school, the Cary native recognized University Theatre as a formative influence. “UT has taught me everything I know about acting,” she says. “All of the stuff I learned in my four years of high school was nothing compared to what I learned here. I don’t know how to describe all the knowledge I’ve learned and how much better it’s made me as a performer.”

Lydia Wonderly, now a senior in Political Science, also joined University Theatre early, after attending their orientation on her first day of class as a freshman. Though she now debates between pursuing theatre or a career as a foreign service officer, Wonderly has used her time in University Theatre to explore many aspects of theatre. Performing in Pride & Prejudice as Jane, The Royal Family, and others, Wonderly also worked backstage with University Theatre in turns as a dresser, in the scene shop, and even as a stage manager. From Pfafftown, Wonderly says she has been acting since she was a child, but has enjoyed the backstage opportunities that University Theatre has offered.

“I’d never had an opportunity to do tech things, since my high school didn’t really have that,” she says. “So once I got to University Theatre, there were all these opportunities to do behind the scenes things… As I kept doing it, my original idea of just being an actor kind of dissolved, so now I’m just enjoying doing theatre—all of it.”

Each of the actors went through a lengthy preparation process before this year’s auditions, even if the virtual process differs wildly from the typical auditions in years past.

“In a lot of ways, there’s less pressure and more pressure at the same time,” said Riki Dows, reflecting on the changes since her previous SETC screening audition. “In the past, auditioning for pre-screenings has been a whole event. You go to the audition, you see all the talent there, and you have to audition in front of everyone. But it’s also more pressure now too. You just get live auditions out of the way. It’s scary, but once it’s done, it’s done. You can’t take it back, you’ve put it all out there. But filming? You just have to be okay with what you do—but as artists, I know none of us ever are.”

Lydia Wonderly remembers her previous SETC screening audition well. “I really stressed myself out last year,” she admits. “I decided immediately that I was going to do it again this year and just have fun. I said, ‘I don’t care what happens, I’m doing this because I enjoy it.’”

Many actors struggle with monologues, but the same cannot be said for Dani Coan. “I’m a person who loves working on monologues,” she says. “In high school, even though I didn’t do a lot of acting, I did a ton of poetry recitation. I’m used to working on one piece very closely and very deliberately, with each line individually.” Indeed, Coan was named 2018 North Carolina Poetry Out Loud State Champion for her poetry recitation, something she credits as helping prepare her for acting with NC State.

In November, auditionees pre-recorded a one-minute audition piece with the help of University Theatre instructor and acting coach Rachel Klem.

“It was really fun, getting to dress up and just stand on the stage, all by myself, and record my monologue,” Ariel Penland says of the recording process. “I did maybe five takes. Rachel watched them all and said which she thought was my best before sending them all to me so I could decide. I think it helped, being able to do multiple takes. It’s nice to be able to see the differences between them.”

After their screening audition pieces were submitted, the NCTC judges evaluated each actor, offering feedback before advancing them to the SETC Professional Auditions. “[The judges] gave me good feedback with my scores,” Penland says. “Looking back at my audition, where they docked me points, I can see why.  It was nice to hear, so I know what to keep working on.”

From there, the actors’ audition videos were distributed to SETC’s auditioning professional organizations for review. For now, the actors wait to potentially be scheduled for callbacks, which we be held during the week of the virtual SETC Conference in March.

Auditions will be highly competitive even amidst a pandemic, so the actors wait, hopeful but without expectation for a contract. Besides an audition piece, Dani Coan points out that there are other factors at work when it comes to casting: “It’s not necessarily a bad thing when people say no, because it’s often over things you can’t control anyway.”

While waiting to hear back, the students have much to enjoy with from the rest of the conference: keynote speakers, workshops, and more. Ariel Penland looks forward to a speaker on acting in film, and Lydia Wonderly is excited for subjects ranging from acting to design as well.

No matter what comes of their auditions, all of the actors are proud of the growth and work that has gotten them to SETC—and for what they’ve learned from their time with NC State.

“I’m leaving University Theatre with an absolute adoration of performance,” says Riki Dows. “It was just something fun to do in high school, but it wasn’t until I got to NC State and started performing with UT that I thought, ‘This is the thing I will chase for the rest of my life.’ Now, I’ve been doing theatre for a while, and it’s expanded past University Theatre to community theatre, and now to SETC—and soon, hopefully beyond that.”

Greetings and news from University Theatre

Hello friends,  This fall, our theatre spaces came back to life. We presented indoor and in-person productions. We had classrooms filled with eager students. Our costume, scenic and lighting shops bustled with the business of

By Teal Lepley When lockdown began in the spring, NC State University Theatre’s Adrienne McKenzie had just taken up a new project and was ready to get started.  McKenzie is a Costume Technician for University

A week filled with exciting events for all! Today we introduce Preparing the Performer: Weekly lessons in techniques and skills for performers and this Wednesday join us for our interest meeting for Argo: A Virtual Voyage

We have some exciting events coming up this week and hope you can join us for one or all. The big one this week is our interest meeting for Devised 2020 this Wednesday, August 19 at 7pm.