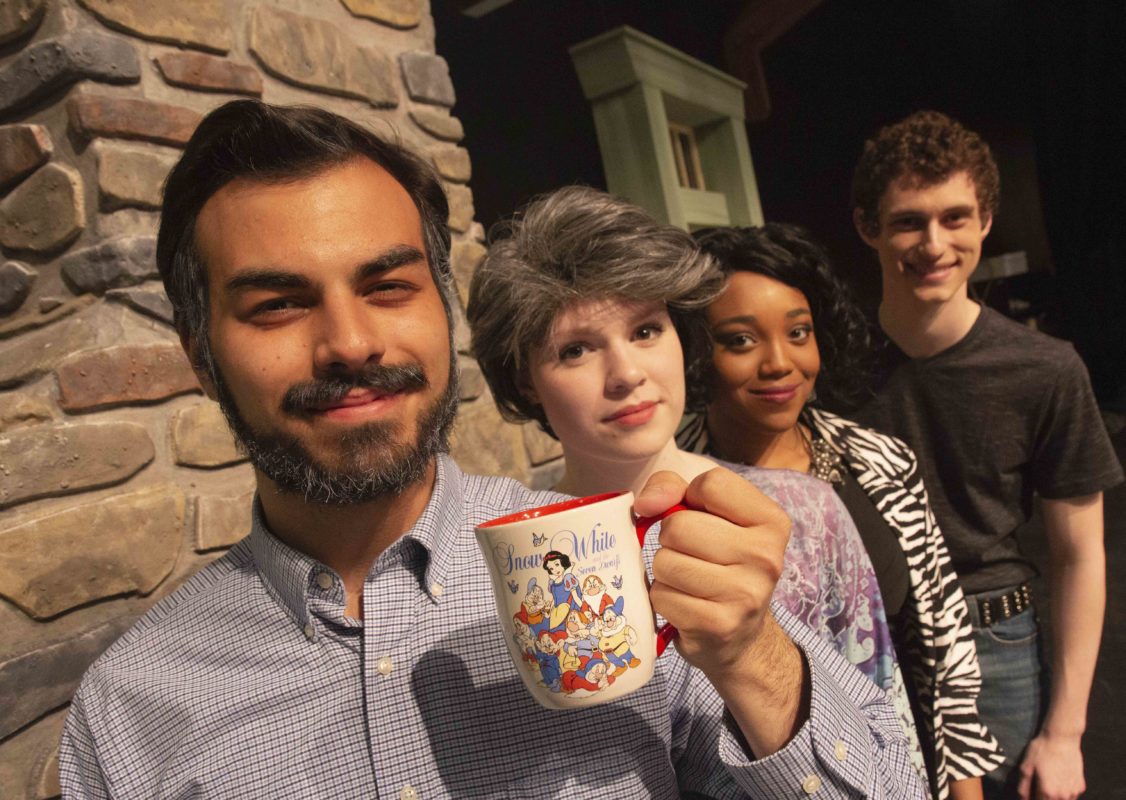 This post was written on March 8, 2020 and was meant to be one of four features surrounding the students and characters of University Theatre’s upcoming production.

Vanya and Sonia and Masha and Spike was canceled due to the pandemic now gripping the United States. The writer, Teal Lepley, and the actor, Adrian M. Pavone, could not have predicted the events to come; however, Adrian’s quote in the final paragraph rings true today.

Take care of each other and stay safe out there. We hope you enjoy this feature.

As in life, so in theatre: time marches on, regardless of how one feels on the matter. At University Theatre, it means that as soon as one show ends, preparation for another begins. The spring musical Ragtime had just closed when rehearsals started for the final University Theatre mainstage show (and only comedy) of the season.

By now, they’re two weeks in, even if spring break gives them an intermission, and Christopher Durang’s absurdist comedy Vanya and Sonia and Masha and Spike is quickly taking shape. It is the passage of time that haunts the family whose squabbles and failings shape the plot of the show. Siblings Vanya and Sonia live in their childhood home while their sister Masha, a famous actress, returns for a visit with her new, much younger beau, Spike―and the news that she might be selling the family home. What follows can only be described as chaos, as the family clashes while a possibly psychic housekeeper, a frequently shirtless man, and a starstruck young neighbor all get drawn into the mix.

A senior in psychology, Adrian M. Pavone plays the eldest sibling Vanya, a man resigned to the rut he’s found himself stuck in amidst his middle age. Though close with his adopted sister Sonia, Vanya is a reserved man who struggles, like many of the characters, to truly connect with others. Complacent to the status quo, it’s the threat of losing their ancestral home that catapults him and his family into conflict, as they are all forced to face the passage of time and their fear for the future. Vanya’s story is not only one of reconnecting other people, but also of renewing a spark of life, actor Pavone says. “That is a central, key point for Vanya: renewing youth, renewing childhood, and renewing that spark of curiosity and excitement and openness, which has been gone from him for a long time.”

I was realizing the value of art in general,” he admits, “But this last year I’ve really come around to the idea of creativity and the value it has

In a way, it’s a feeling he shares. Though preparing to graduate with his degree in May while rehearsing five times a week, it’s the first show Pavone has acted in since high school. “At the time, I don’t think I was realizing the value of art in general,” he admits, “But this last year I’ve really come around to the idea of creativity and the value it has. So I was I was hoping to come back to theatre this year and really be able to focus on this creative side of it.” Despite his hiatus from acting, he’s thrown himself back in with enthusiasm and great thought about both the experience and the characters. Pavone also tells of how he was encouraged by his experiences in an acting class he previously took with the show’s director, Rachel Klem. “I’m really happy to be coming back into it with a more intentional focus,” he says, “And being open to the influences that will come from around me.”

With a cast of only six actors, it’s easy to understand how they can relate and dig into their characters’ relationships and arcs so easily. Only two weeks into rehearsals, they talk like old friends and bond over inside jokes from the show, lending their chemistry and humor to the characters well. Whether it’s bickering over a costume party, having competitive crying fits, or giving a spirited monologue about the nostalgia for old postage stamps, you never quite know what to expect from the characters—an unpredictable spontaneity that the cast eagerly embraces and the director Rachel Klem encourages enthusiastically.

Amongst the cast of characters in the show, there is a curiously precise division of generations. The three siblings sit solidly in their middle age, bickering and disengaged, but it is the younger characters—a meddling housekeeper, an earnest neighbor, and of course, Masha’s young boyfriend—who act as catalysts for the family’s change. For Vanya, it’s the friendship he forms with their neighbor Nina that helps him share his fears and hopes the most. Though a thoroughly absurd comedy, Vanya and Sonia and Masha and Spike has great heart amongst the laughs, as the family struggles to open up and understand each other. “I hope audiences leave with the idea that they should love the people around them. It’s easy to bicker, it’s easy to get upset about little things, but at the end of the day, the people you have in your life are the most important thing,” Pavone says. “I hope they leave laughing, but I hope they leave touched too.”

Vanya and Sonia and Masha and Spike was scheduled to run April 1-11, 2020 in Titmus Theatre but was canceled. Tickets holders will be notified soon regarding refunds.